All things AWS, Linux and Opensource

From the inception of the World Wide Web (www), websites and pages were a popularly adopted concept in the digital world whether it was for used for commercial, government, research or community purposes.

Making websites more interactive and useful for daily transactions led to implementation of dynamic websites which were developed in either in a high level programming language such as PHP, Java or JavaScript. As the need of having an online presence surged, the pain of developing feature rich web applications increased as it involved different software frameworks and coding. That is where Web Content Management Systems came to the rescue for easily creating and managing content. 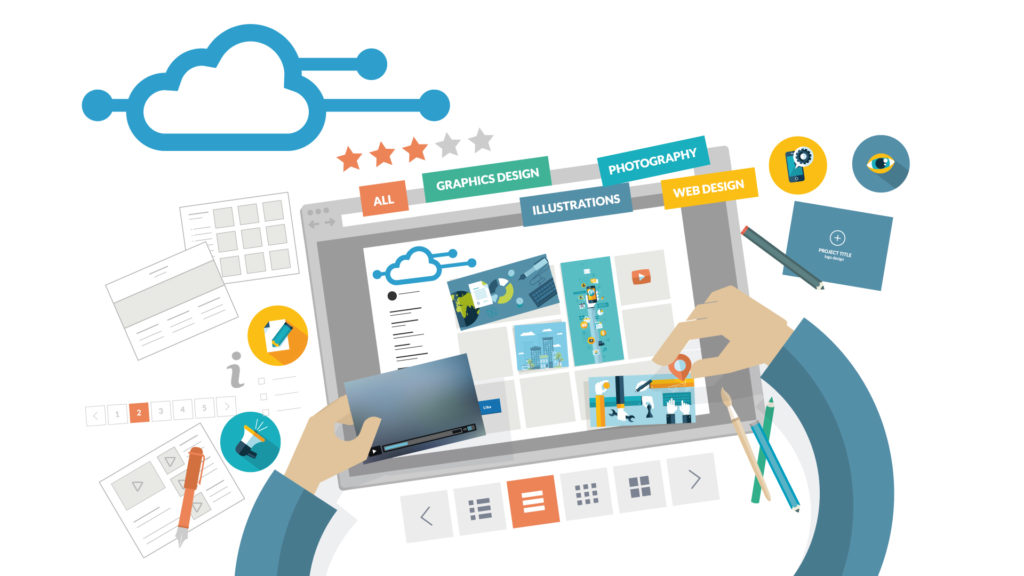 Web Content Management Systems (WCMS) provides website authoring, collaboration, and administration tools that help users with little knowledge of web programming languages or markup languages create and manage website content. It also controls a dynamic collection of web material, including HTML documents, images, and other forms of media. As of today, WordPress is the leading content management system (CMS) with 63% market share and 36.2% of all websites built with it, followed by Joomla, Drupal and so many other open sources as well as paid options.

The increase in number of internet users and mobile devices and rapid digitalization caused explosive growth in web traffic. The www project happened in 1991 with one website and today we have around 1.8 billion websites and growing rapidly.

With all these advances in technology, a traditional CMS seems unappealing and too dated.

Decoupled CMS with Frontend WebApp and a Headless CMS

In a traditional CMS, the CMS application is responsible for storing and managing the content as well as dynamically generating and presenting the content to the audience. This can cause performance issues as the monolith application would need to keep serving content, even in times of a surge in web traffic, while continuing to be accessible to content authors for new content to be created and published.

In order to improve speed and performance, the best option would be to decouple the ‘head’ (the frontend) from the ‘body’ (backend processing / content management) and integrate them with an API, i.e., run the CMS headless and have the frontend as a progressive web application with a JS framework of your choice.

This separation will help create multiple client screen size friendly static files. ReactJS code will run in the client side. Static pages can be served through a Amazon CloudFront which is a Content Delivery Network (CDN). The advantages of using GraphQL with GatsbyJS for pulling the CMS content to generate the static pages over using a REST API are

Architecting the solution in AWS

Following the AWS-Well Architected Framework, the following pillars are to be kept in mind when designing the architecture.

We will also deply an Application Load Balance in the public subnets and all the traffic to the CMS application will go through the load balancer. The ALB receives inbound traffic at HTTP/HTTPS ports 80/443 from the internet. A SSL certificate should be created and attached to the ALB with AWS Certificate Manager (ACM). All requests coming over 80/http will be redirected to 443/https.

Next we need to create a base AMI with latest (stable) PHP, Drupal 8 and Apache 2.4. Amazon CloudWatch agent, AWS Sessions Manager agent and AWS CodeDeploy agent should be installed. We will then create an AutoScaling group (ASG) with minimum 1, desired 1 and maximum 2 instances as the Scaling Policy. The ASG will be associated with different private subnets to ensure high availability. The EC2 instance Security Group (SG) will have inbound traffic allowed from only the Load Balancer SG.

We will now create the database, an RDS Aurora MySQL cluster, with the Writer and Reader instances in different subnets. The database will need to set to be not publically accessible. The SG of the RDS instances will have inbound traffic allowed only from the Application EC2 instances SG.

We need to create a CodeCommit repository for keeping the Drupal 8 code. A master and dev branch should be created at the minimum.

AWS CodePipeline helps orchestrate end-to-end deployment. Automatic triggerring of the pipeline will be done with the help of CloudWatch events whenever there is a code push in the designated branch. The resulting artifact will be versioned and stored in an S3 bucket as an encrypted object. This will be used by CodeDeploy in the deployment phase once the Manual Action stage (Approval) is passed.

We can optionally mount an Elastic File System (EFS) shared filesystem mount point at /var/www/drupal8 /sites/default/files where static assets which are not part of the source code (newly uploaded images, icons, cached CSS and js files etc.) will be saved. This enables the availability of these assets when new instances are launched by the ASG. This step can be achieved with a simple shell script and appspec.yml.

When new EC2 instances are launched as part of an Amazon EC2 Auto Scaling group, CodeDeploy will deploy code revisions to the new instances automatically. 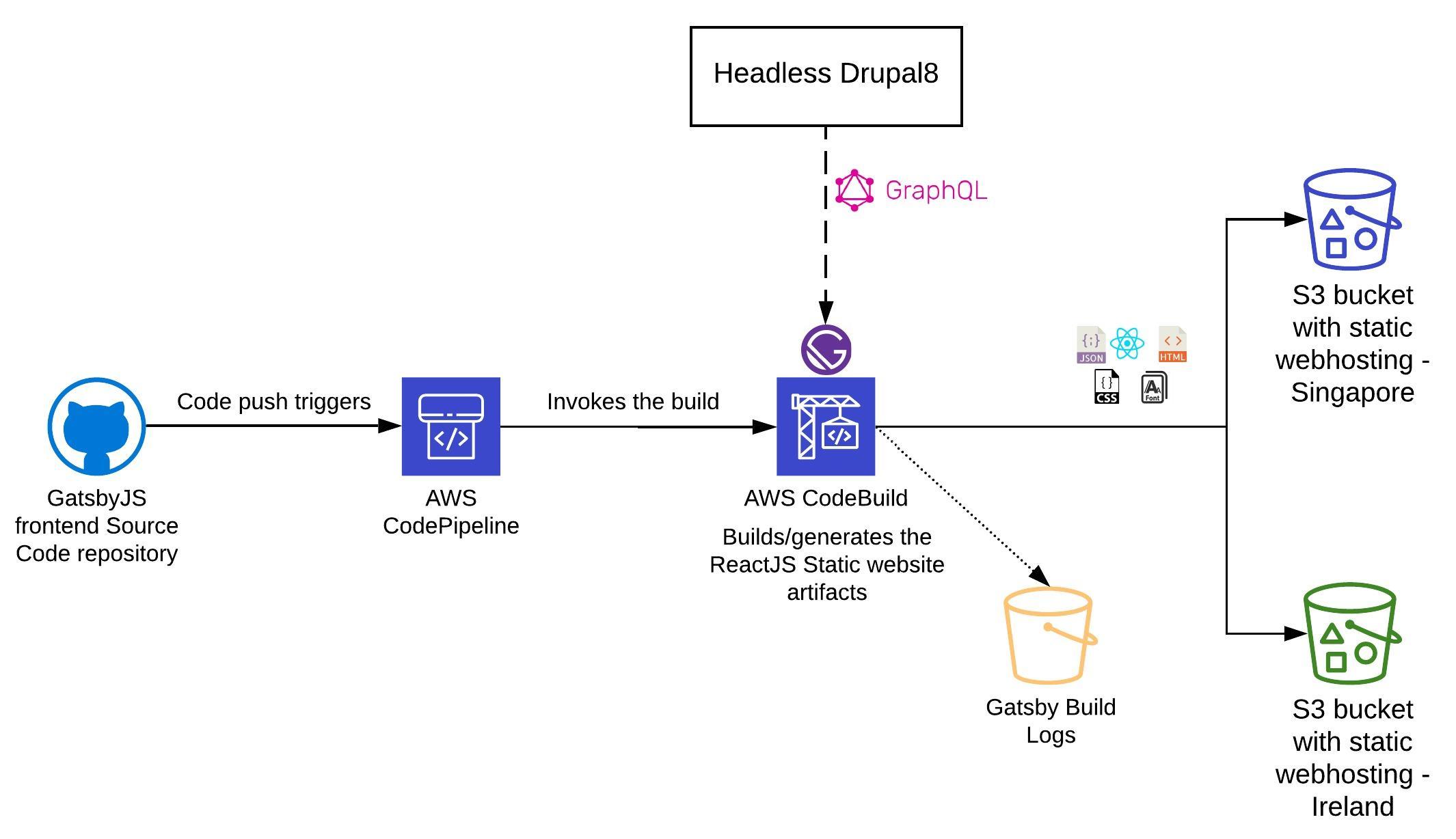 Similar to the Drupal8 CMS deployment pipeline, we will have another pipeline for the frontend. However, we need to configure the Amazon CodeBuild buildspec.yml (build specification/configuration) so that build process can be automated without requiring a continuously running build server. The build logs can be populated in a CloudWatch logstream or written to a S3 bucket,to help with debugging in case of any issues.

Here is a an example buildspec.yml :

The resulting artifacts will be the ReactJS static website with html, js, cs, fonts etc. This should be synced to two S3 buckets in different regions as a deployment. This will ensure site availability even in case of an AWS region being unavailable.

Improving the site performance with a global CDN:

The S3 static website can directly be used to serve the website. However, we can serve the site as a Progressive Web Application (PWA) through a high-speed global Content Delivery Network (CDN), preferably Amazon CloudFront.

A CloudFront web distribution with custom SSL certificate for the domain has to be created. We create three origins – one for the ALB for dynamic requests and two custom origins, one for each of the S3 static web hosting endpoints (say, Ireland and Singapore buckets). Create an origin group with the two S3 static web hosting endpoint origins to provide re-routing during a failover event. We can associate an origin group with a cache behavior to have requests routed from a primary origin to a secondary origin for failover. Something to note - we must have two origins for the distribution before we can create an origin group. 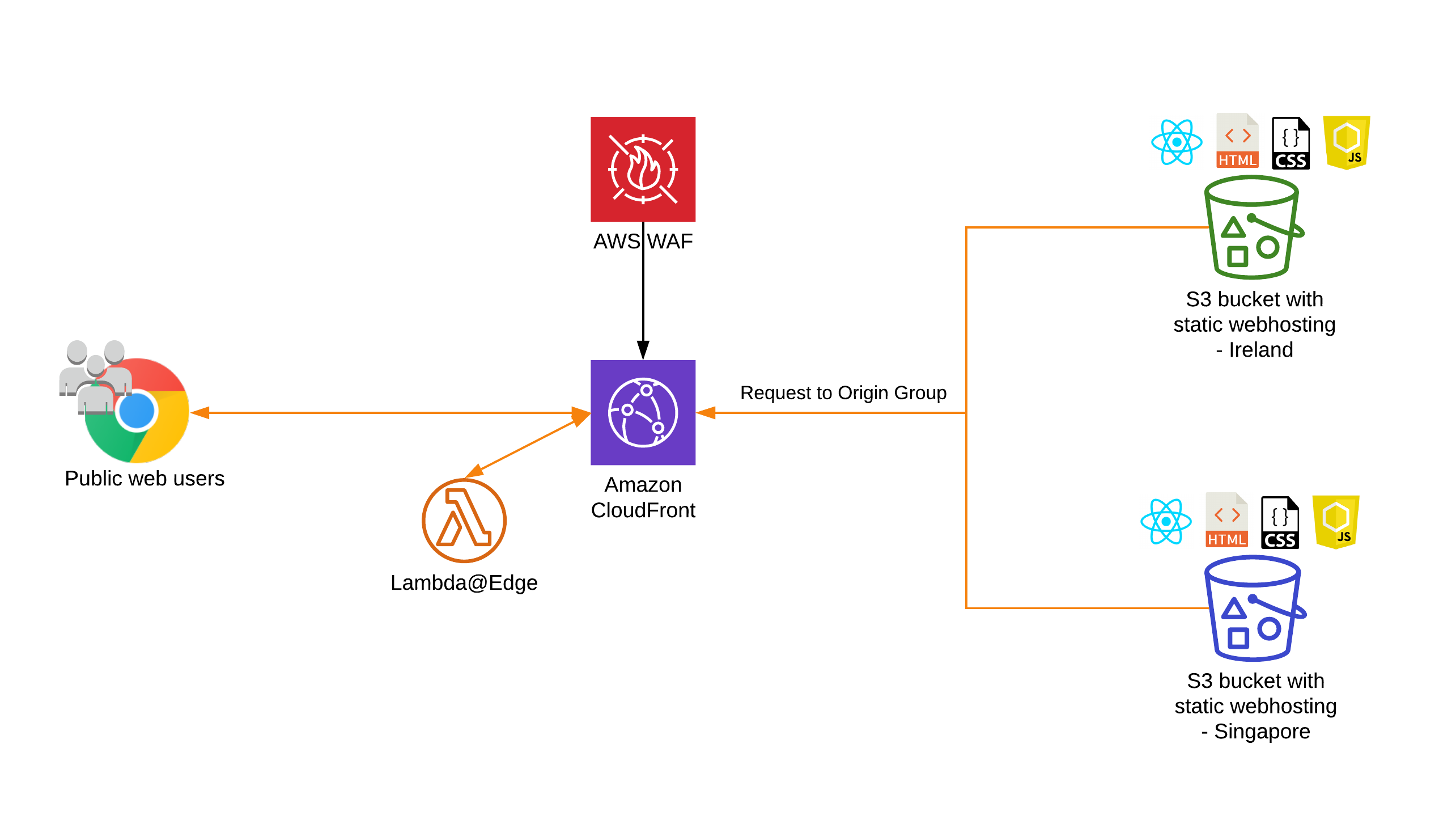 Furthermore, we can associate Lambda@Edge functions to append custom headers, perform redirection or have additional processing logic for each request reaching each Cloudfront cache behaviors. We can create up to 25 cache behaviors per Cloudfront distribution. A Web Application Firewall (WAF) with OWASP top 10 rules should be deployed to protect the CloudFront endpoint from attacks or to thwart common exploits. 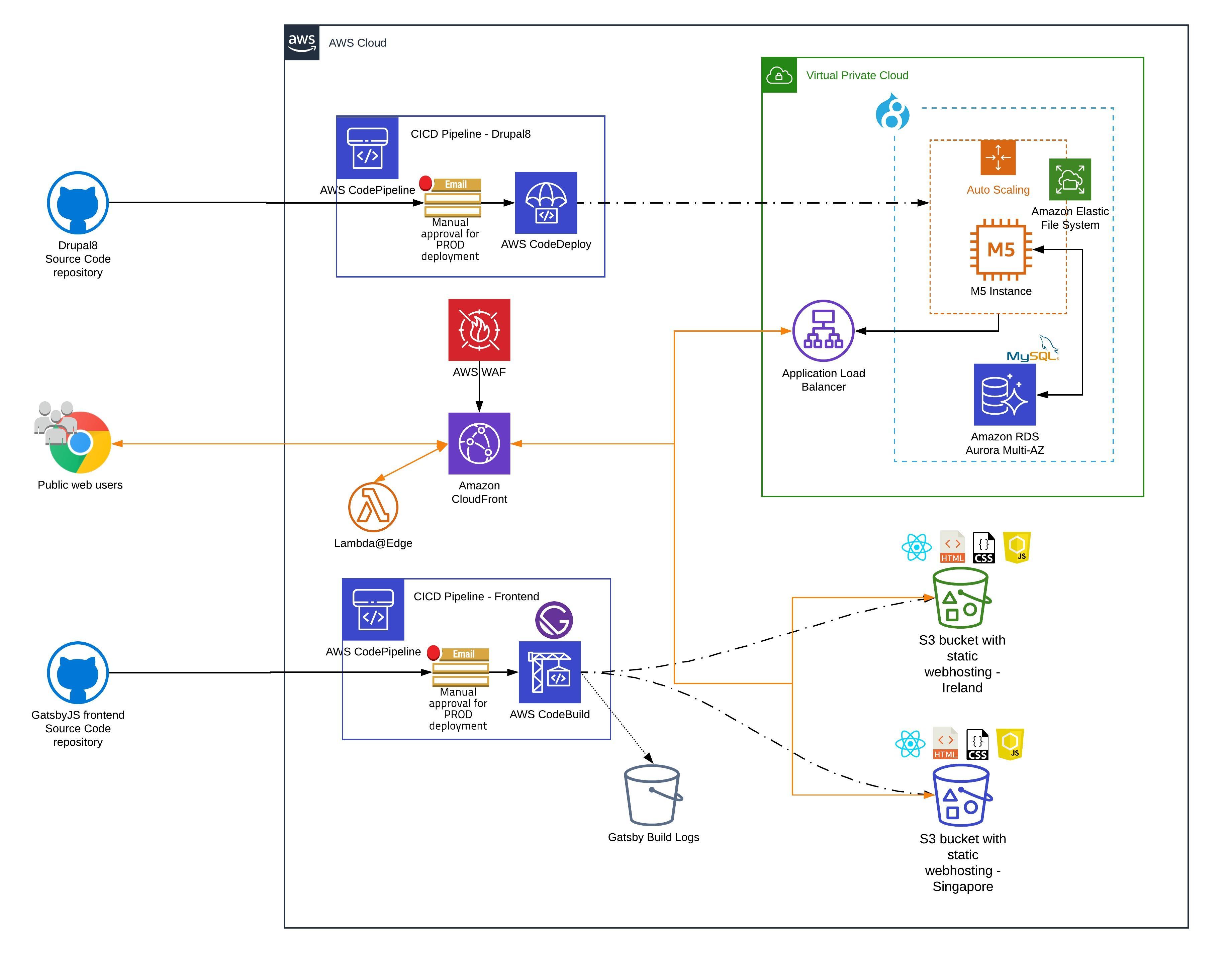 Running a application headless is a great way to improve performance, security, availability and to reduce costs. The advanced ecosystem of DevOps related services on AWS makes it easy to create, deploy and maintain complex web applications.